A walk around this charming, picturesque tree-lined quays from Pont Louis-Philippe to Quai d’Anjou, taking in the 17th-century hotels that infuse the area with a great sense of period. It then penetrates into the heart of the Island along the main street, but Saint-Louis en l’isle, enlivened by chic restaurants, cafes, art galleries and boutiques, before returning to the north side of the island and back to Pont Marie.

From the Pont Marie metro station, walk down quai des Celestins and quai de l’hotel de Ville. Lined with traditional bookstalls, from where there is a very good view of Isle Saint Louis. turn left at Pont Louis Philippe and having crossed it , take the steps down to the lower quay immediately to the right. Walk around the tree-shaded west-point of the Island then up the other side to the Pont Saint Louis. Opposite the bridge , on the corner of Rue Jean du Bellay, is the Flore en L’Isle, the smartest cafe on the island.

There are cafes , such as Flore en L’Isle and the Berthillon shop for Ice cream. The restaurants on Rue Saint-Louis en l’Isle include L’Auberge de La Reine Blanche ( NO. 30) and also Au Gourmet de L’Isle ( NO.42), as well as a Patisserie and Cheese shop. Two good resting spots are the tree shaded quays and square Barye to the Eastern end of the Island.

the history of the flea markets in the city of light.

Their origins go back to the junk trade a few centuries ago. The archbishop of Paris gave the OK and flea market historians tell us , rag and junk merchants ( some were called chiffoniers) were given a very limited right to sell their wares ( rags & bits of used items of all kinds).  In the 19th century merchants were asked to move outside of Paris ( reasons of hygiene). At night they would gather up discarded items of every kind that they would recycle or transformed into something useful – scrap metal, broken glass ( to remelt for windows), fat for candles, old bones into buttons, and all kind of cloth ( from the most rough material to the very finest silk) to be used for all kinds of purposes.

In 1883, a city official by the name of Poubelle ( used now for the word garbage can) came up with a health measure, which was the requirement that garbage receptacles in Paris be sealed, putting the livelihoods of these chiffoniers at risk. They protested because they had very limited access to the bins at certain times. Also in the meantime, rents in Paris had become prohibitive for many of these scrap dealers who began to move their operations in the periphery, also around Porte de Clignancourt. From what I have read, a scrap-metal market was taking place in St-Ouen, the nearby commune. So the concept of the flea markets, as we all know today, evolved from these origins. The rich Parisian bourgoisie had accumulated a lot of possessions that were out of fashion provided fodder for merchants. In the 1800’s a small group of chiffoniers got together between the city of Paris and the commune of St-Ouen and began offering a public that was extremely curious, some of the wares they had collected.

A trend was starting to emerge and people from other parts of Paris would come to St-Ouen to have a look at this very new phenomenon. All kind of objects were sold at these primitive outdoor markets ( that is when the expression marches aux puces began to be used). The markets would sell old furniture, linens, clothing, books, dishes and other merchandise at random.

The St-Ouen market was a very festive affair where people would gamble, play games in the midst of the brocante. By 1908, one could get to the brocante by metro only in a few minutes. Around 1920, the first permanent markets at St-Ouen were installed – First the Marche Vernaison and then soon after the marche Malik. Others followed over the next few years and then decades.

Flea markets elsewhere in Paris developed in a very similar fashion. The Porte de Montreuil market began when rag and junk merchants were driven from the center of Paris towards the East and it really took hold after world war one. The Place d’Alligre from what I have heard was already the site of a clothing market before the French Revolution and has continued in this way into this century. It has recently evolved into a general flea market, in which bric-a-brac and other things  besides secondhand clothing and old linens are sold.

In the sixties, the hippie generation made the wearing and use of secondhand goods a kind of mantra of their age.

The flea markets of Paris are year around, the best time to go would be spring or fall and I do not recommend Summer when heightened pollution, influx of tourists & the heat make it difficult to enjoy. Also in August a lot of shops & restaurants are closed.  The flea markets of Paris are not always limited to weekends, Place d’Alligre is held every day except Monday; the Place de la Bourse market takes place on the last Friday and Saturday of the month. Both Porte de Montreuil & St-Ouen markets are held every Monday in a diminished form ( just a few merchants) as well as on Saturday & Sunday. The weekend is always the best time to go to the flea market, that is when the Porte de Vanves market takes place, a favorite of a lot of Parisians.

I like the Puces de St-Ouen where you can find the most high-quality and high end items.But I will admit that in terms of beauty and ambiance, these flea markets take place in places that are not wonderfully quaint neither are they picturesque in case you just want to stroll  along or relax at a nearby cafe. The most visually appealing markets are the Porte de Vanves and Place de La Bourse and Porte de Montreuil and around St-Ouen are not very attractive and the Place d’Alligre is not one of the finer squares in Paris. If your goal is to browse and buy then it’s fine & you won’t be disappointed, but if you want to look for photo opportunities, just forget it. These markets are for very serious foragers, if you have brought the family along and they are not into flea markets, they have many choices of things to do in Paris.

Porte de Vanves, Place de La Bourse or even St-Ouen markets are where the extraordinarily high-end  nature of the wares definitely offsets the unappealing environment.

Prices reflect the level of the market, if for example you find something interesting at Porte Montreuil or Le marche d’Alligre, the price will be cheaper than at Place de La Bourse and especially at The St-Ouen markets. Also you will find Quimper wares much cheaper in Paris than in Brittany and I think the reason behind the pricing is that there is a lot to choose from in Paris.

Bargaining is part of the Flea market language in Paris or else where in France. You can get a 10 to 15 % off from the original asking price. Parisians are definitely used to tourists, but if you speak some French you will find out that it does not necessarily hamper your bargaining success.

The best way to go to flea markets in Paris is to take the metro because all these markets , both Place de la Bourse and Marche d’Alligre are in the center of Paris.The first is at a metro stop and the second is at about 5 to 7 minutes walk away.

To let you know, driving in Paris can be a nightmare, both to drive & park and taxis are neither cheap nor particularly time saving. I would recommend to visit Portes de Vanves, whatever your collecting interests are. If you like high-end antiques and collectibles or if you have an interest in the flea markets as an historical phenomenon, spend time at the St-Ouen markets. Also another idea for people visiting Paris, you can always hop on a TGV  and take day trips to flea markets in Rouen, Orleans and Tours , they all have great flea markets and they can be reached in an hour or so.

Also the advantage of taking the TGV is that you do not have luggage so you can move around freely. You can fit in a lot in your schedule and after visiting the flea market you can go back to Paris sometime in the evening. Also all train stations are on the metro lines, so getting there and back is pretty simple.

Luxury Travel Consultant2 will offer a free trip to the one person who can bring 11 friends together for a flea market adventure in Provence. For more information contact anne@luxurytravelconsultant2.com. We customize tours, just for you. 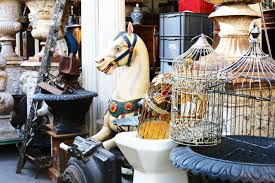