Giant ash trees,( Les Frenes ) will be part of the landscape as you stroll through the old quarter of Vence.  The walk will take about a couple of hours and you will enjoy Vence very much with its old stone -paved streets and medieval houses huddling inside a ring of 13th-century battlements. Before you enter the walls through a sixteen century Porte de Peyra  pay a visit to the Chateau de Villeneuve ,  which is a host to different programs of contemporary art and design exhibitions.

After walking through the gateway, make a turn right and allow half an hour to walk through La rue du Marche where rows of shops selling herbs, fruit, fresh pasta and fish will make your mouth water. If you want to see the cathedral, walk to the end of Rue du Marche ,you will turn left and walk across Place Surian and Place Clemenceau  and there it will be. Look out for Roman inscriptions dating back almost 2,000 years back on the masonry of the buildings either side of it carved when Vence was the Roman settlement of Ventium . Also you will see the oak choir stalls carved with little satirical figures , commissioned by a witty 17th-century bishop. Leave the square by its north side underneath the arched Passage Cahors  , then you will walk up Rue du Seminaire and you will turn left to follow the old walls along Rue de La Coste. If you leave the old quarter by the Levis Portail which takes you back to Place du Frenes, you will come across several cafes and restaurants where you can enjoy lunch or a drink and snack. 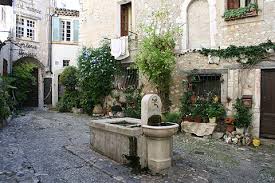 Despite modernization , country life in Provence still continues according to the cycle of the seasons, a calendar that alternates periods of very intense work with equally intense festivities to celebrate the earth and its fruits.

Spring unfolds very quickly and by February mimosa is out and almond trees start to bloom in March, soon followed by wild flowers growing everywhere. Olives and vines must be pruned and cereal crops sown.

By April, plums,peaches, apples, apricots, pears and quinces are in blossom, and fires are lit in the orchards to stop the frost, killing the delicate buds. The sheep are sheared, and Easter is celebrated with the first spring lamb. The very first nightingales (known for its beautiful and powerful song) and swallows appear. In Arles ( Camargue) Pain de St-Georges is baked to celebrate the feast day of the patron Saint of Camargue on 23rd of April.

May 1st is considered the beginning of summer. Primeurs are (early fruits and vegetables ) that you will find on vegetable stalls as well as asparagus, cherries,peas, apricots, melons and strawberries with amazing aromas and a taste of sunshine, they come from nearby market gardens. The flocks are shepherded back to the hill pastures, following the traditions of the Transhumance ,( a seasonal movement of people with their livestock between fixed summer and winter pastures ; a movement between higher pastures in summer and lower valleys in winter). The autumn sowing of wheat is ready for harvesting in June. On the summer solstice, St John’s day ( June 24th), bonfires are lit to celebrate the end of the harvest ( Fete de la St Jean). Other harvest festivals include a great deal of wine, music and dancing and among them are St Eloi or St Roch and also huge banquets in village squares with the famous Aioli. As summer progresses the lavender fields are beautiful with color and thyme, rosemary, marjoram and sage can be culled from the wild. Melons, peaches and almonds are in abundance. August is the perfect time for ratatouille with courgettes, tomatoes, aubergines, garlic, onions and peppers, all of them overflowing in the markets. Honeysuckle, clematis and myrtle blossom on sunny walls or trellises.

September is dominated by the grape harvest, Les Vendanges, a perfect time for friends, neighbors and families come together to pick grapes and spend long evenings drinking jugs of wine and relaxing after the day’s arduous labor. The countryside is a patchwork of red, gold and rust coloured tones as the leaves turn in the vineyards and forests. Mushrooms and particularly sought after Cepe, begin to spring up in woodlands and everybody is out at weekends  collecting sticks and bags for turning over leaves to seek them out. Figs are in season and the rice harvest is in full swing in Camargue. A less peaceful harvest is under way as the hunting seasons open and you will find wild Boar ( sanglier) and walnuts appearing in the markets.

The last major harvest of the year is picking olives, it starts in November, in his twilight years Frederic Mistral named his last work ” The olivades” since he knew too that his season was over.The first bottles of wine go on sale. The cold weather is the signal that the transhumance of sheep back down to the mountains and hunting begins for the famous black diamond in the forests nearby. The countryside seems to hibernate and many people only venture forth to warm themselves with hearty, nourishing soups and stews in the local taverns. Christmas is a major celebration in the depths of winter.