Deep in the heart of Provence?

While the thought might give a pause to some of Texas residents, historians now tell us the the American cowboy is actually descended from the French gardian, the Provencal cowboy. Horace Greeley who wrote ” go West”, advised that in the early 19th century, these Camargue ranchers did exactly that:shipping out to the French colony of New Orleans, then they spread out across America as the first horse-wranglers. They brought along their black felt hats, string ties, and to the later gratification of Levi-Strauss – bleus de travail or jeans invented in the Provencal city of Nimes. Their festival wear: including traditional velvet vests- seen in full glory during the Fete des Gardians in Arles in May- inspired a local resident and now designer Christian Lacroix. Today Les Gardians are a unique breed, proud of their centuries old traditions and disdainful of the Hollywood cowboy poseur. Insular and taciturn they love to kid you when they first meet you, if you take offense they will kid you even more and if you don’t take offense, they will warm up to you. 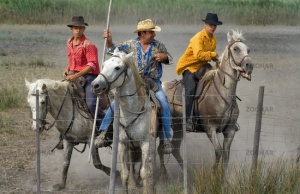